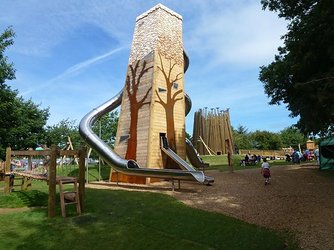 Pensthorpe Natural Park is located in Norfolk approximately one mile from Fakenham. The park covers approximately 700 acres and the River Wensum, which runs through the site, is a designated Special Area of Conservation. In 2008, 2009 and 2010, Pensthorpe became the home of the BBC’s Springwatch programme, playing host to Bill Oddie, Kate Humble, Chris Packham and a host of local wildlife stars all born at Pensthorpe in the last 20 years.

Launched in July 2013, WildRootz is a 7,000 square-metre adventure play area which is unlike anything else Norfolk has to offer. Child-friendly thrills are nestled subtly into their stunning natural surroundings with trees and gentle rolling hills managing to encompass over 30 pieces of individual play equipment including the giant 11 metre high slide tower called ‘The Worm’. Hootz House opened in July 2015, an amazing nature play experience for children. Imaginatively designed and complimentary to the overall vision of weaving play into education about the natural world, Hootz House provides wildlife orientated play activity.